Andrew Henry Abugelis was born June 12, 1923 in Chicago, IL.  In 1942, after graduating from Argo Community High School in Summit, IL, he enlisted in the Navy and went through boot camp training in Great Lakes, IL.  He went to Norfolk, VA and was assigned to the crew of the aircraft USS Yorktown.  From there, he was sent to the USS Charger for flight desk training for about two weeks.  He then went back to the Yorktown for commissioning April 15, 1943.  Sailing and training in the Atlantic Ocean was the ship’s shakedown cruise and then through the locks of the Panama Canal to Pearl Harbor.  His responsibility on the ship was plane handler in the V-1-T division in 1943, and in 1944, he became a V-2 plane captain for the famous VF5 squadron.

His many memorable days consist of serving on the greatest ship in the US Navy, the USS Yorktown with the finest officers and sailors in World War II; becoming plank owner on the famous aircraft carrier; being attacked at night by Japanese air groups after day-long air strikes by Yorktown causing casualties; and fire at night with Bogeys in the sky above.

Medals and ribbons received by Andrew were: Victory Medal, American Campaign Medal, Asiatic-Pacific Campaign Medal and ribbon with five stars, as well as the Presidential Unit Citation with one star.

Following discharge in November 1945, Andrew worked as a carpenter and foreman for 20 years, and then as a construction superintendent for 22 years until retirement.  Andrew has been married to his wife Virginia for 70 years, has one daughter Gail, sons Robert and James, four grandchildren, and seven great-grandchildren.  He currently lives in Leonardtown, MD. 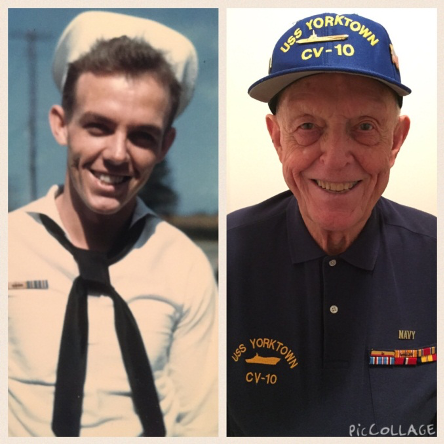