Born in Toledo, Ohio, Mr. Miller served in the 15th Air Force, flying more than 20 missions as a pilot of B-24 Liberator heavy bombers. On February 5, 1945, his plane was shot down by anti-aircraft fire near Vienna, Austria. Mr. Miller was the lone survivor among the crew, captured immediately after he landed by parachute.

He was fond of recalling the day his POW camp was liberated by Patton’s Third Army. “The General himself came into the camp and invited us to grab a gun and join the fray in quite colorful language!”

Mr. Miller mustered out as a First Lieutenant in November of 1945. He received degrees in architecture and urban planning at the University of Pennsylvania with the help of the GI Bill. In the 1950s, he redesigned 24 US Air Force bases in England to accommodate new jet aircraft technology.

Upon his return to the United States, he took over his family’s architecture firm of three generations in Indiana. He worked on countless major projects, including the remodeling of the Pentagon. A Fellow of the American Institute of Architects, recipient of many awards, and member of many boards, Mr. Miller was highly regarded by his fellow architects, staff, and many friends.

Mr. Miller was a beloved and steadfast presence at the WWII Memorial. He participated in many of Friends' educational programs, speaking to students and teachers about his service and the legacy of WWII. He delivered the keynote address at the 2018 Veterans Day Observance. He said that “participating in the WWII ceremonies is a way to honor my lost crew members and friends, always vivid in my memory.”

May his memory be a blessing to his family and friends. He will be greatly missed. 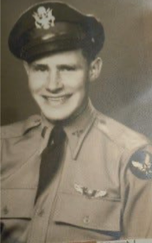