There Frank’s father and uncle opened Carlo’s Bakery in 1910, the bakery still serves the residents of Hoboken today under a different owner. Frank joined the Navy on April 8th 1944, after basic training, Frank was quickly sent into action.

Frank’s first ship was torpedoed and sunk, he was then transferred to the SS John Barry where he immediately embarked for a secret mission as a member of a force protection team. Here is an excerpt from Wikipedia of the day of the sinking of the SS Barry.

“The SS John Barry left its convoy under radio silence to go on a mission to Dhahran in Saudi Arabia when it was torpedoed 185 kilometers (115 mi) off the coast of Oman by the German submarine U-859 on 28 August 1944. Two crewmen were killed in the sinking and the survivors were rescued the next day. The SS John Barry was carrying a cargo of 3 million American-minted Saudi one-riyal silver coins as an American payment associated with ARAMCO. The reason for this shipment (one of several during the war) was that Saudi Arabia did not use paper money at the time and this led to a war-time shortage of currency with which to pay workers building new oil refineries and other US facilities at newly founded Dhahran.

Because the exact nature of the cargo was a secret, rumors spread that the SS John Barry carried a vast shipment of 26 million US$ (1944 value) worth of silver bullion to India as well as the smaller cargo of coins. After the recovery effort of this purported treasure failed (see below), it was discovered that all silver shipments to India were accounted for and a new destination for the silver bullion was theorized, the Soviet Union.”

Frank was seriously wounded during the sinking of the Barry, he returned home with a knee injury and shortly after that married his childhood friend, Frances DeLucia. They had two children Frank and Suzanne. Frank worked as a proud Teamster until his retirement in the 1980’s. Frank died on December 19th 1990.  Frank’s grandson Michael Embrich continued the proud family tradition of naval service by serving on the USS Theodore Roosevelt from 2000-2004. 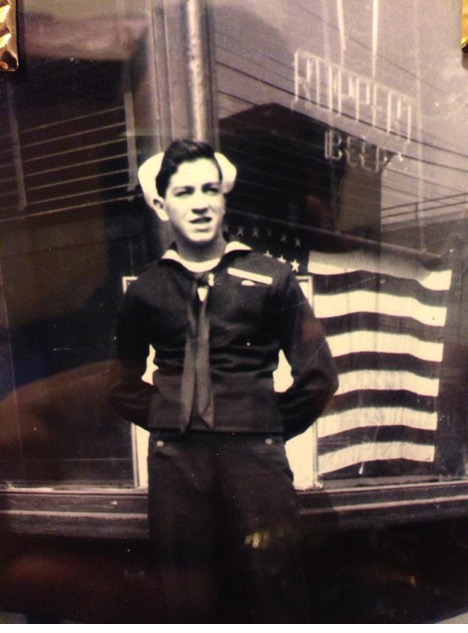