Colonel Frederick C. Clinton, a retired U.S. Army Colonel and a veteran of World War II, the Korean War, and the Vietnam War, died on July 9, 2020, at the age of 92.

Colonel Clinton was born on July 27, 1927 in Boston, MA. He spent his early years in Norfolk, VA, where he entered the Army in 1943 at the age of 16. During World War II, Colonel Clinton served with the 63rd Infantry Division in France and Germany as a Private in an Infantry Heavy Weapons company, part of the 254th Infantry Regiment.

In 1950 he went to Korea with the 3rd Infantry Division and landed in North Korea where his Division was involved in fighting against North Korean and Chinese forces. He advanced to the rank of First Sergeant in Korea and received a direct appointment in the Army's Adjutant General Corps.

On return from Vietnam he served with STRATCOM Europe and as a department director at the Army Institute of Administration located in Fort Harrison, IN. During his military service he attended the Army Command General Staff College, The Army War College and was a graduate of Saint Benedict's College, Atchinson, Kansas. Colonel Clinton retired from the Army in 1974 after 31 years of active service.

For a number of years after his retirement from the Army he was involved in the wholesale and retail business until his second retirement in 1992. He spent the remainder of his life working for world peace and conflict resolution.

Colonel Clinton's military decorations include the Combat Infantryman Badge, the Legion of Merit, four Bronze Star Medals, an Air Medal, three Commendation Medals, a Joint Services Commendation Medal, a Meritorious Service Medal, two Presidential Unit Citations, a unit French Croix de Guerre, a Meritorious Unit Citation and eleven battle stars. His foreign awards include four awards from the Vietnamese government, one from the Korean government and five from the French government including the French Legion of Honor. Colonel Clinton was also named as an Honorary Citizen of Jebsheim, France, for his work in the area of peace and reconciliation.

Colonel Clinton was a regular presence at the National World War II Memorial in Washington, DC, driving himself to the Memorial to take part in commemorations and wreath laying ceremonies.

He was a good friend to all of us here at the Friends of the National World War II Memorial, and we will miss him dearly. But we will remember him and carry him with us each time we return to the Memorial. Colonel Clinton is buried in Arlington National Cemetery.

Thank you, Colonel Clinton, for your incredible service to this country, and for your friendship. Rest in peace, Sir. 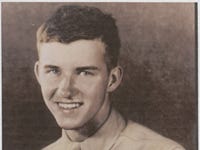