James B. Carter was born in Manchester, New Hampshire on December 7, 1915.  He joined the New Hampshire Army National Guard in 1934 and his unit was called to Active Duty with the U.S. Army in January 1941.

He attended OCS in Fort Sill, Oklahoma, then Liaison Pilot (Artillery Forward Observer) School in Denton, Texas, and was assigned Executive Officer, "B" Battery, 229th Field Artillery Battalion, 112th Infantry Regiment, and 28th Infantry Division at Camp Pickett, Virginia. He attended the U.S. Navy's Shore Fire Center in Norfolk, Virginia, where he learned how to call in fire missions from the battlefield to offshore battleships.

His unit arrived in England in January 1944, and they went ashore on Omaha Beach in July, and fought in five ETO campaigns.  A memorable moment for him occurred as his unit progressed down the Champs Elysees during the Liberation of Paris Parade, when a young French girl handed him a white silk handkerchief. This handkerchief will be with him forever in his casket at Arlington National Cemetery.

On one of his flights over German lines during the "Battle of the Bulge" a small arms round entered the bottom of his Piper L-4 "Grasshopper" in front of his feet, passed up between his knees, grazed his forehead (resulting in a 1" vertical scar in the middle of his forehead) and passed through the bill of his leather cap on its way out the top of his airplane. 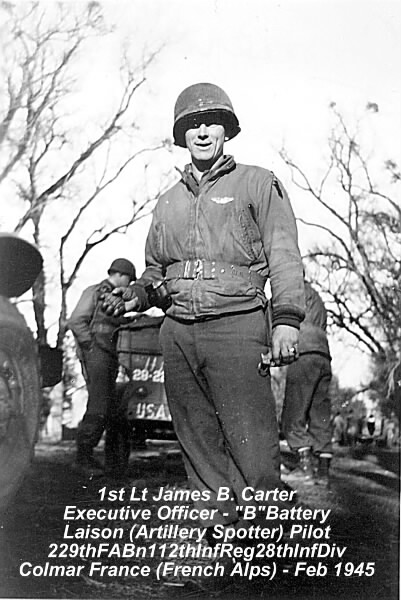