Born in 1921 in Vacaville, California, Petty Officer First Class Joseph Melgarejo joined the U.S. Navy Air Core division at the age of twenty in September of 1942.  During World War II, he was assigned to the Squadron 68 aboard the U.S.S. Fanshaw Bay, Parachute Rigger, First Class.  His Air Squadron participated in the following operations:

He received the Presidential Unit Citation for service as set forth in the following;

“For extraordinary heroism in action against enemy Japanese forces in the air, ashore and afloat.  Operating continuously  in the most advanced areas, the U.S.S. FANSHAW BAY and her air squadrons destroyed or damaged hostile warships , aircraft, merchant shipping and shore installations despite frequent and sustained air attacks.  She sent out her planes repeatedly in spotting and strike missions to annihilate the enemy’s ground installations, troops, tanks, trucks and parked aircraft and to destroy his airborne planes.  Operating as a highly disciplined and superbly coordinated team throughout 124 days of action, the FANSHAW BAY and her air groups achieved an illustrious record of performance in combat which reflects the highest credit upon her gallant officers and men and upon the United States Naval Service.”

In route to their next operation, the U.S.S. Fanshaw and the Task Unit 77.4.3 came under attack on October 25, 1944.  The ship was hit by a kamikaze plane loaded with a five-hundred pound bomb.  The plane exploded on the hangar deck; however, the bomb did not explode.  Petty Officer First Class Joseph Melgarejo was awarded the Presidential Unit Citation for heroism in action against powerful units of the Japanese Fleet during the battle off Samar, Philippines, October 25, 1944, for service as set forth in the following;

“For extraordinary heroism in action against powerful units of the Japanese Fleet during the Battle of Samar, Philippines, October 25, 1944.  Silhouetted against the dawn as the Central Japanese Force steamed through San Bernardino Strait toward Leyte Gulf, Task Unit 77.4.3 was suddenly taken under attack by hostile cruisers on its port hand, destroyers on the starboard and battleships from the rear.  Quickly laying down a heavy smoke screen, the gallant ships of the Task Unit waged battle fiercely against the superior speed and fire power of the advancing enemy, swiftly launching and rearming the aircraft and violently zigzagging in the protection of vessels stricken by hostile armor-piercing shells, anti-personnel projectiles and suicide bombers.  With one carrier of the group sunk, others badly damaged and squadron aircraft courageously coordinating in the attacks by making dry runs over the enemy Fleet as the Japanese relentlessly closed in for the kill, two of the Unit’s valiant destroyers and one destroyer escort charged the battleships point-blank and, expending their last torpedoes in desperate defense of the entire group, went down under the enemy’s heavy shells as a climax to two and one half hours of sustained and furious combat.  The courageous determination and superb teamwork of the officers and men who fought the embarked planes and who manned the ships of Task Unit 77.4.3 were instrumental in effecting the retirement of a hostile force threatening our Leyte invasion operations and were in keeping with the highest traditions of the United States Naval Service.”

After the war, Joseph attended Golden Gate University in San Francisco and earned his degree in Business Management and Real Estate.  He has two daughters and recently celebrated his 65th Wedding Anniversary with his wife Margaret Melgarejo.  Joseph enjoys retirement by playing golf, reading, dancing and keeping a positive attitude. 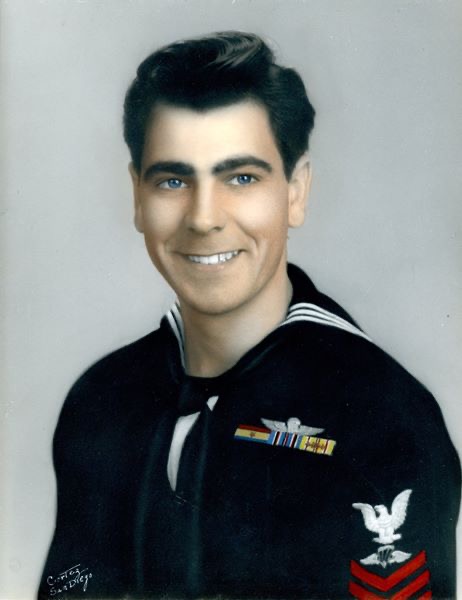