Wilbur Williams was sworn into the U. S. Navy on January 16, 1942 in the building on 17th Street just south of Pennsylvania Avenue where President Abraham Lincoln handled his telegraph messages during the Civil War.

After Boot Camp in Norfolk, Virginia and Signal School at the University of Chicago, his first assignment was on the USS Doran DD634 in Boston, Ma.  His next and last assignment during WWII was to the USS Jeffers DD621 on precommissioning detail.  The destroyer Jeffers’ home port was Brooklyn Navy Yard and this ship was Bill’s home during the war.

The Jeffers was a part of the convoy escort for many supply convoys to the UK and later the troop ship convoys for the build up prior to the Normandy Invasion. Bill participated in the invasion of Sicily on July 10, 1943, the Normandy invasion on June 6, 1944, and the Invasion of Southern France later that year.

The Jeffers was converted to a high speed mine sweeper in the fall of 1944 and left the Atlantic and sailed to the Pacific.  The crew went thru training exercises in San Diego and near Pearl Harbor prior to heading west to Okinawa.  The ship swept mines in Buckner Bay, Okinawa for around 8 days prior to the invasion which took place on Easter Sunday, April 1, 1945. Our Destroyers knocked down a number of suicide planes, but also suffered a lot of damage while on this picket duty and Kerama Rheto Harbor became like a graveyard for Destroyers. All in all we made out very well with only minor damage. Our worst day was April 12, the same calendar day that President Roosevelt died, when we survived a multi plane suicide attack.

The Jeffers was sent to Guam for battle damage repairs and then returned to sweep more mines around Japan prior to leading the Missouri into Tokyo Bay for the surrender ceremonies on September 2, 1945.

Soon after Bill was put on the beach at Buckner Bay to await transfer back to the States for discharge along with other shipmates.  He traveled back to the west coast and was processed out of the Navy at Terminal Island, San Pedro, California on October 19, 1945. 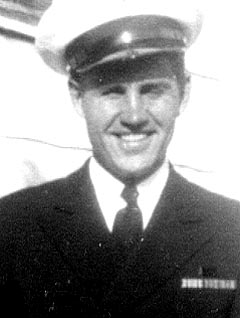